The most successful social movements deploy a variety of actions strategically to ensure success.[1] Movements that use one tactic over and over again are like a broken clock that correctly tells time twice a day—they can sometimes work, but they’re not very efficient, and they can easily lead to burnout.[2] This sort of idealization of particular tactics also creates rigidity and tension between activists who have different preferences for different tactics, preventing us from developing the creative and resilient movements that are necessary for coping with changing political environments.

It’s important to realize that no available research has shown that any one action is a surefire bet for social movement success, but many studies have shown that a limited tactical repertoire, an inability to adapt, and infighting makes movements unsuccessful. Overall, remember that tactics are tools—nothing more, nothing less—whose effectiveness varies according to your goals, political environment, and issue area.

The most effective activists have a large number of actions in their tool belts. The false dichotomy between “working within the system” and “working outside of the system” is a myth that lacks substance and hinders our ability to enact change. The most effective movements use both mainstream tactics—such as voting, lobbying, and drafting legislation—and nonviolent mobilization tactics—such as protests, boycotts, civil disobedience, strikes, sit-ins, and rallies.[3]

Cress and Snow’s 2000 study highlights the power of using a diversity of tactics. The authors compared 15 homeless organizations across 8 U.S. cities to examine the effectiveness of different tactics and strategies. They included four measures of success: gaining positions on local boards and task forces, gaining material and financial resources for organizations, securing additional rights for homeless people, and securing facilities and restorative programs for homeless people.

They compared each organization’s success against five highly effective conditions: organizational viability (meaning that the organization had been established for more than a year, met regularly, and hosted regular protest events), sympathetic political allies, support for the organization from the city, clear messaging that identified the problem the organization was working to address, and clear messaging that identified the solution to the problem. (Cress and Snow also tested the effect of disruptive and illegal tactics, but that turned out to be the most risky of the conditions and backfired in supportive cities and for movements without political allies.)

This study is one among many that shows that being well-rounded and using diverse tactics is key to success.

But how do you choose your actions? And how do you make sure the actions you do choose are being implemented successfully?

We created the Points of Activist Intervention chart to help you understand the wide variety of tactics available to you. 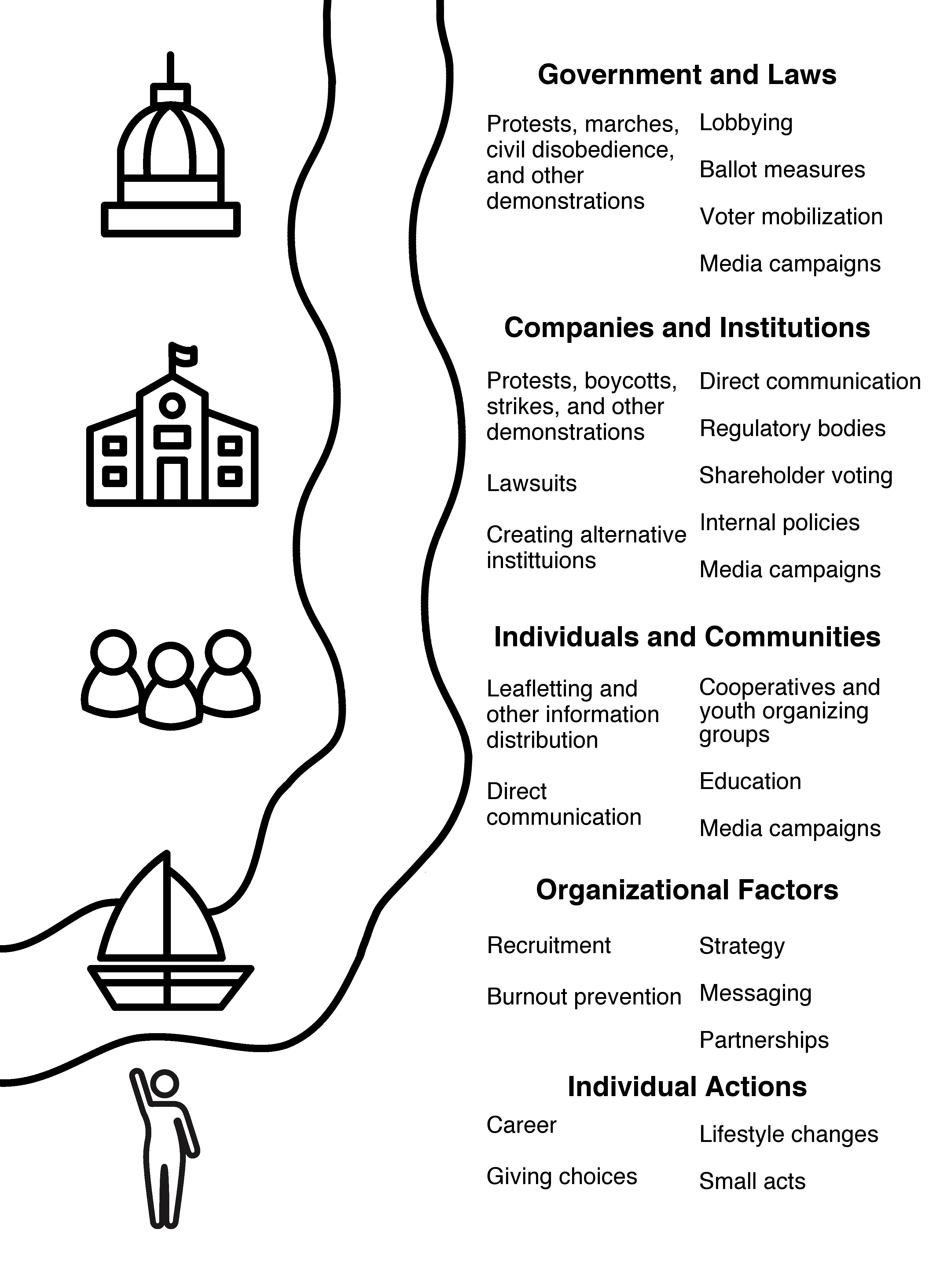 We envision social change as occurring along a river—upstream structural factors, such as laws and policies, flow down the river, shaping other institutions and norms, which then flow down and influence individual behavior. Of course, these factors are all interconnected, and impacts can swim upstream as well—individual behavior can impact institutions, which then go on to impact the government.

We envision progressive activists on a boat, which is able to traverse the river. We can travel upstream to effect change at critical sites through a variety of tactics. Our boat, which is strengthened or weakened by our organizational and movement factors, greatly influences our chances of success. If we’re traveling in a dinky little rowboat—if we have no allies, vague messaging, and no planned strategy—our organization is unlikely to be able to adapt to changing conditions and have much influence. We as individuals also impact our ability to create change. If we have high-impact careers, donate to progressive causes, vote, and adopt other impactful lifestyle changes and individual actions, we can greatly bolster our movements.

In general, successful activists prioritize a small number of the most impactful individual actions and organizational factors and use a variety of tactics aimed at several targets in order to create change. There is no perfect formula for which actions, factors, and tactics to choose; you must do the hard work of researching your local political climate and your issue area to determine how to best leverage your power. The things that work today in your area might fail in ten years or in another region. This is why accurately measuring success goes hand-in-hand with effective campaigns—you need to be able to evaluate when your efforts are falling flat, so you can switch up your methods if need be. The most successful movements don’t necessarily get everything right on their first try; they adapt to changing environments and measure their impact to continue moving forward even when some tactics or strategies fail.

Researchers have examined how to most effectively implement a number of these actions. In Part 1 of this guide, we summarize the available research on how to use activist tactics successfully to target the government and laws, companies and institutions, and individuals and communities. In Part 2, we review how to bolster your movement through effective organizational factors. In Part 3, we cover the most effective individual actions for creating change. Many actions, tactics, and strategies overlap, so we recommend reading the whole guide to gain a robust understanding of how to be an effective activist.

Let’s start working through some of the most tested activist tactics.

Need to dig more into the literature? Visit our  full references page  to search for the article you’re interested in.