Although the amount of money in politics has discouraged many activists from attempting to reach out to their policymakers, many studies have shown that community members have a large impact on officials.[2]

Another study randomly assigned all members of both houses of the Michigan legislature to either receive calls from constituents on an issue or to receive no calls. The study found that legislators who were contacted by constituents were 12% more likely to support the relevant legislation.[4] Lobbying works—so contact your officials and encourage other progressives to do the same!

The Congressional Management Foundation has been surveying congressional staff members for over a decade in order to  help individuals learn how to best communicate with their elected officials. Their most recent report (2017), Citizen-Centric Advocacy: The Untapped Power of Constituent Engagement, provides detailed information and case studies on how individuals can have the most impact on their Congress members. While we summarize the report below, we recommend reading the entire report if you’re interested in learning more about lobbying. The report can be found for free at the Congressional Management Foundation’s website, available at: http://www.congressfoundation.org

The most effective strategies for influencing elected officials include:

Contacting the all of the elected officials, Republican and Democrat alike, in your district frequently is key to getting your organization’s issues on the political agenda.

Research has shown that people tend to only contact policymakers who are of the same political party.[5] This is problematic because a survey of almost 2,000 U.S. legislators found that both Democrat and Republican policymakers tend to overestimate the number of conservatives in their districts by up to 20%,[6] likely due to a small number of outspoken conservatives contacting elected officials frequently.

Thankfully, the number of progressive individuals contacting their elected officials has skyrocketed in the past few years.[7] You can join this historic shift by reaching out to all of your local officials and making sure they know that their constituents stand for progressive issues and causes. Be sure to only contact those within your district—it is widely accepted that elected officials try to take only their constituents’ needs into account when making decisions.

One of the most common ways people contact their representatives today is through copy-and-paste emails or signing their name on an online petition. Unfortunately, these are some of the least effective ways of influencing elected officials. Studies have found that generic messages, such as mass copy-and-paste emails and pre-recorded phone messages, are not very useful in swaying elected officials.[8] Personally writing your own emails, letters, and social media posts and making personal phone calls are much more effective at influencing policymakers.[9]

In a survey of congressional staff, the Congressional Management Foundation asked what constituents can do in order to influence elected officials’ decisions. The most influential forms of contact include in-person visits, contact from constituent representatives (such as local associations, nonprofits, and companies), personalized emails and letters, local editorials, comments during town halls, personalized phone calls, letters to the editor, visits from lobbyists, and social media posts directed at the congressional office. 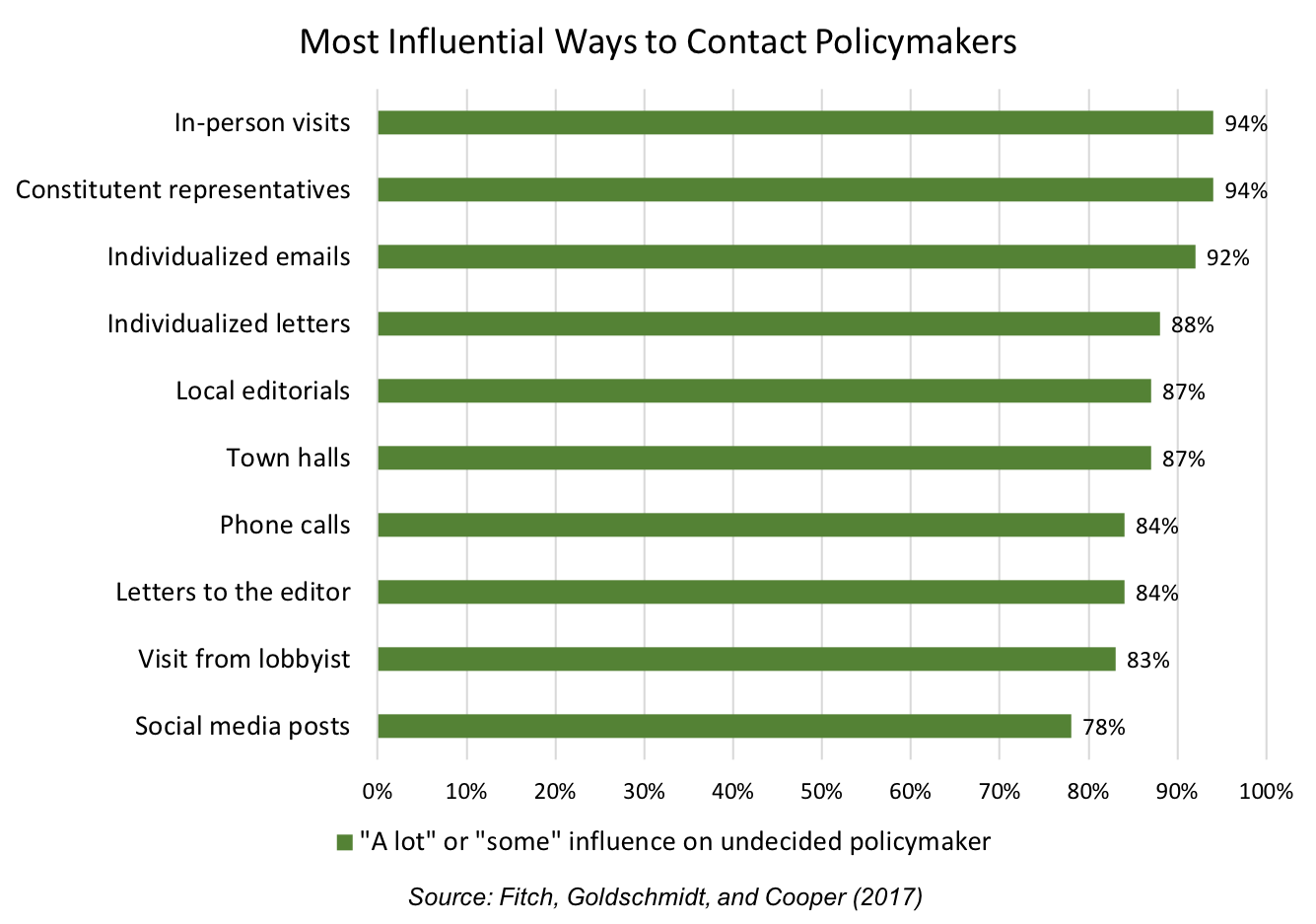 It’s also important to remember that building a relationship with the office of your officials and its staff members can greatly increase your impact, as staff members help inform elected officials and carry out many of the important tasks related to decisions. Getting to know Legislative Assistants, District Directors, and State Directors can help you build a better relationship with your Congress members.[10]

Although we often construct arguments that are the most persuasive to us,[11] it is much more effective to persuade by tapping into the values of the person you’re trying to convince.[12]

A food bank in Fresno, CA had great success using values-based messaging tailored to their elected officials. They were working to secure more funding for produce at their food bank and to get the CalFood program to use California-produced food. The food bank successfully persuaded their primarily conservative state legislators to support their cause by framing the issue in Republican values. They emphasized the positive local economic impact of food banks and framed their cause as an economic stimulus that would support the local economy. As a result of their work, their officials approved the use of California-produced food in the CalFood program and designated $2 million of the state budget for food banks to purchase California-grown food.[13]

Constituents often fail to persuade their elected officials when they are either underprepared or overprepared. Vague, partisan appeals to support progressive policies from clearly uninformed individuals often fall flat. On the other hand, individuals and groups that send along multiple-page reports with detailed background information and dense analyses of multiple issues often overwhelm policymakers.

In order to have the most impact, the Congressional Management Foundation (2017) recommends preparing a one-page brief that clearly explains the local impact of the issue at hand. Over 90% of congressional staff say that this information would be helpful to have, but only 9% report that they receive such information on local impacts frequently.[14] Include a couple of simple, clearly stated facts or statistics. One study found that showing Republicans a pie chart or a simple sentence with the statistic that 97% of climate scientists agree that climate change is happening led those Republicans to boost their estimates of the scientific consensus around climate change by 14-30%.[15] Doing your research can really pay off!

If you’re meeting in person, send the brief along before your meeting so your policymaker or staff member has a chance to review it before they talk to you. Briefs should include the following information:

After you’ve sent your brief over for review and you’re ready for your meeting, or if you’re reaching out via a phone call, letter, or email, you can use the following basic outline for communicating with your officials:

By following these strategies, you can greatly increase your influence in politics.